Well, the switchboard at work was turned off at one, so we were free to leave early today.

And I did a few minutes later when Baby Girl arrived in town for a long-awaited lunch at our favorite Japanese restaurant.  She had Lunch A which had ramen in one bowl with shrimp on top and another bowl full of something else that looked delightful. I had Lunch B which was an assortment of nigiri and sushi and salads.

Originally we had made plans to go home and immediately start on the cookie extravaganza. We changed the plans over lunch, deciding that we both needed time to decompress.  She is knitting herself a sweater.  And Mary Otter has window frames: 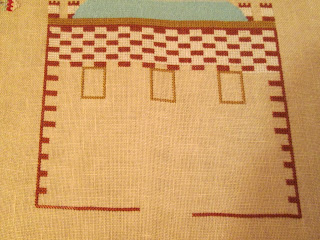 We finally were hungry enough to have leftover lasagna for dinner and then got down to work. Well, we sort of halfway got down to work. I had made the cookie dough the night before so it could chill. We decided that we could do half of each recipe to take to Mother's tomorrow, then do the rest some other time over the week-end.

At one point in my past as a Domestic Diva, I would make ten or twelve different varieties of cookies every year. At the time, we had children in and out who would take care of eating them. Now that we don't have an easy cookie-disposal system--and Dearly Beloved and I don't need to eat hundreds of cookies--we have settled on the two recipes that everyone loves and make those.

Although I'm very tempted to stop by the grocery store tomorrow to pick up flaked coconut and apricot preserves because there is a new recipe I'd kind of like to try ...