I'm posting now because I may not be up at midnight for the ceremonial dumping of the ort jar: 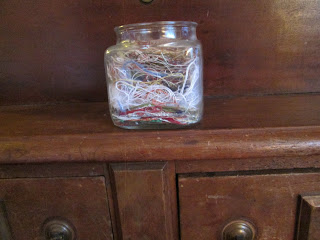 That thick layer of white was caused by the threads withdrawn when I was working on Isabella earlier in the year. It took me a minute to remember that I had dumped those threads in the ort jar.

As for stitching in the last couple of days--I've laid a few bricks on Mary Otter and thought about projects for the New Year--but Dearly Beloved and I spent time yesterday undecorating the Christmas tree and removing it from the premises, then vacuuming--and vacuuming--and vacuuming up the needles the tree left behind. There are still needles popping up in areas that we both know one or the other of us went over--and went over--and went over.

Today we finished undecking the halls and I puttered. I got all the Christmas boxes back in the closet.  I did some cooking for the week ahead. I talked to Baby Girl (twice), The Big Kid, The Flash, and Mother.  I folded up some laundry and got that stowed. I read the newspaper and spent time online. I read the new issue of Victoria.

I also shivered. It's COLD. It's not negative digit cold, but for the sunny South, it's nippy.

Now I think I'm going to go boil myself in the shower and get into my nightgown and robe, then curl up in the wing chair with a blanket--which I may well throw into the dryer to warm it up before I wrap up in it--and say farewell to 2017. I have to say, I'm glad to see this one leave. And I'm looking forward to the new year--I love the idea of a fresh start!
Posted by Ann at 4:18 PM