We are home again. We like our home, don't get me wrong--but when you have a lovely, relaxing vacation, reality is tough.

I had plans for this evening, which included going to my sampler guild meeting. But after a long, leisurely lunch with Baby Girl on the way home (which was long and leisurely because the service was so slow) and extremely heavy traffic (I can understand why people who live in snowy climes might want to head south, but did they all have to come today?), we arrived home a couple of hours later than anticipated. We've been playing catch-up ever since.

One of the things I was going to do when I thought I would get home at three instead of five was to set up the next prestitch for one of the classes I'm taking from Sherri Jones at Salty Yarns in April.

This is as far as I've gotten: 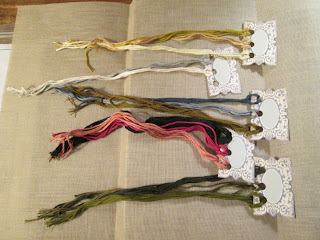 And now I'm going to bed.

Tomorrow is a work day.