Today I worked the Nun stitch border around the tray part of the workbox.  I thought it was going to just fly. It didn't, but it's done now. 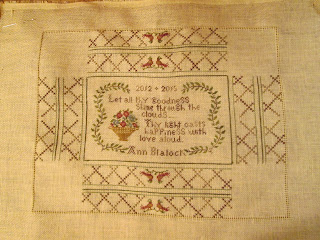 I need to stitch in some basting lines that will be used to shape this into a tray, then I can move on to the needle page.

My original intention was to stitch all day, but we undecorated the Christmas tree instead. It didn't take as long to take the ornaments off and pack them away as it took to adorn the tree, but the clean-up afterwards . . . live trees eventually start to shed needles (the reason we decided it was a very good idea to remove the fire hazard) and, while this one didn't shed as much as some we've had, there was major vacuuming to be done.

And no matter how meticulous, there will be needles which have hidden themselves, only to reveal their presence at some future date. We used to joke that we'd get the very last needle about the time the plastic grass from the kids' Easter baskets would start appearing. We no longer have Easter basket grass, but we still have persistent fir tree needles.

An artificial tree is starting to look better all the time . . .
Posted by Ann at 5:28 PM