We were allowed to come home early from work today, which is the best thing that has happened in the last four or five days.

We have been beset by a series of domestic disasters. Everyone is (thus far) uninjured and relatively healthy, but let's just say that Dearly Beloved is getting four new tires for Christmas. I am getting a washing machine. Neither gift was planned prior to the last forty-eight hours.

And it's raining again.

And I can't see out of my new glasses. 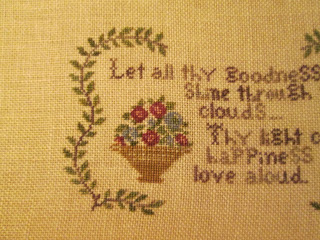 I finally stitched in the flowers and leaves for the basket, and it was not without a struggle. If there was a way to miss a thread, I found it. I think I probably stitched enough stitches to do all the flowers three times over.

Now the plan is to scurry around and do the final dusting and de-cluttering for our Christmas get-together--which will happen on Boxing Day this year--so that I can bask in the light of the Christmas tree and breathe for the next couple of days. And possibly stitch.