Doesn't Play Well with Others

There aren't many things in this needlework world that I truly dislike but I have found one thread that is just about to drive me around the bend.

I've started one of the smalls to accompany the Fair Maiden Etui. This is the Fair Maiden Perfume Etui, which will hold the scrimshaw ruler and bodkin. It is so very precious that I don't know that I can stand it.

It is outlined in a gold metallic thread that comes on a spool. I had thought about using Gilt Silk Twist, since it was used extensively in the Etui and the Needle Roll. I have plenty left from the main project. And I absolutely love the way GST looks. The two of us have come to an understanding so we know how to cooperate with each other.

But then I thought more. The Perfume Etui is engineered to use the metallic thread, including the "stopper" for the "vial." I wondered if I changed all that if everything would fit together. So I went ahead and worked with the thread that came with the kit. 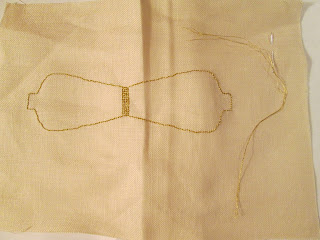 The outline is done. I don't know if you can see the thread lying across the linen, but you may be able to see that it is made up of three strands. On the spool, the strands appear to be twisted, but the minute you cut the thread, they immediately decide that they do not wish to be associated with each other in any way for any longer and they start untwining. Not only that, but one of the strands decides it wants to bubble up and create weird little loops on the surface of the work. Consequently, the user spends a great deal of time running her fingernails from the bottom to the top, trying to smooth that rebellious strand into place.

I have tried waxing the thread to see if that would stick it together. It laughed. I tried retwisting. That made it even more rebellious. I used short lengths. I used long lengths. I said ugly words. I finally decided to just grit my teeth and periodically snarl and get it done.

Of course, I also have to wrap some rings with this same bloody thread to create the cap the closes the top. While I'm already using the thread, I may as well get that step over with.

And then I will do something I have done only once before in my stitching life.

I'm going to throw the rest of the thread away.
Posted by Ann at 4:48 PM