It occurred to me last night that I was no longer feeling the Zen from the repetitive motifs in Briar Rose. 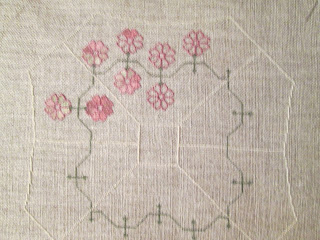 I got to this point and decided I really, really, really needed to pick up another project to alternate--sort of a carrot and stick approach. If I do two flowers, I can then work an hour on something else, for example.

So I went looking for something to alternate with this--not that there is any lack of something to do around here, but I wanted something that would be a very strong carrot.

I thought of three different projects that I want to do sooner rather than later.

The first one needs to be sewn to scroll bars. None of my available scroll bars are long enough and I'm not about to take something already sewn to bars off--it's too much of a pain to sew the linen on to even consider that.

The second one I'd like to work on stretcher bars. I found the ones for the length, but guess what? The shorter ones I need, with the right notches in the right places, are involved in Briar Rose.  So that's not going to happen.

The third project was an online class. Because I rarely work on online classes while they're going on, I print out the lessons and put them in notebooks until such time as I'm ready to stitch.  The kit was already downstairs in the sooner-rather-than-later pile, and I remembered seeing the notebook on the online class notebook bookcase. So that's where I went.

I take a lot of online classes.

The bookcase is jammed.

In attempting to pull out the notebook I thought was the one I wanted, there was . . . for lack of a better description . . .an explosion--and another notebook crammed in the case erupted from the shelf.

And landed on my foot.

I now have a puffy foot with a cut across the top and a rather impressive, technicolor bruise forming.

And I've decided just to power through on the posies until they're all done.
Posted by Ann at 3:54 PM