I really wish I had gone ahead and cut out the board and silk for the box that holds the drawer that I made in class with Betsy Morgan on Saturday. I just did the bits I needed for the drawer.

I had a goal. I wanted to get the drawer put together, and by golly, I did. At that point, class was pretty much over so I left and took a nap. Then I thought about how much I could have done that evening if I'd cut out everything else I would need to cut out.

Well, thought I, I'll just do it as soon as I get home again.  I knew it wouldn't happen yesterday. Baby Girl and I had decided to go home a slightly different way--we decided to detour by Williamsburg and have lunch and run by the printer's shop to see if they have patterned paper I could use for a couple of projects (they did---that will be seen at a later date).

This would have been absolutely brilliant if everyone on the east coast of Virginia had not decided to go to Busch Gardens Sunday morning. Seriously. It took over an hour to go less than forty miles on a major highway, yet as soon as we got to the exit for Busch Gardens, the traffic vanished in a puff of exhaust.

So we had lunch, then we headed back to her house, which again took longer than usual because of  road construction. Miles and miles of one lane open on the highway. Sigh . . .

This morning we both slept late, so I got a later start than I thought I might. But there was still the afternoon--I'm not going back to work until tomorrow so I had hours.

I also have the dullest X-Acto knife in the Carolinas, perhaps the entire Southeast, quite possibly the continental United States. I found this out very soon.

Then I found out that Dearly Beloved at some point had "borrowed" my long quilter's ruler and managed to get something dark and sticky on it. He scrubbed it off for me. He also scrubbed off some of the markings.

I have lost the will to go on with this project on this particular day. I think it may be safer to make a list of things I need, cut out the 40% coupon for Michael's, and stop there on my way home from work tomorrow.

So I'm going to do some more on Briar Rose. This is where it is at the moment: 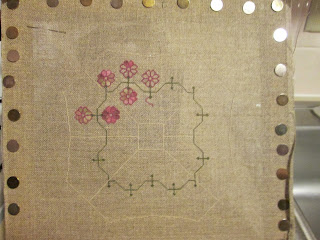 I really need to get cracking on this--Jackie is offering a new class on Shining Needle and enrollment started today. And of course I have to sign up for it. Because I need another set of smalls and because I'm going to live to be 385 to get all this stitched and put together.
Posted by Ann at 12:35 PM