The plan for today was to put the back of the Fair Maiden Etui together and to attach it to the front-and-side assembly.

That was the plan.

It didn't happen that way.

After going to bed later than I planned, and getting up earlier than I wanted (if you don't get to the Farmers' Market early, you don't get the best stuff--much less a parking space), and not sleeping well in between, I decided that perhaps I should not be allowed around sharp needles and the big shears.

So, I'm working on the needle roll that accompanies Fair Maiden. It was the Early Bird class the year I took Fair Maiden in Williamsburg. 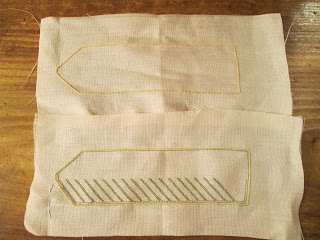 I stayed up too late last night because I was determined to get the broad chain stitch outlines around both pieces before I went to bed. And I did. I am off two threads. I discovered this as I worked the outlines for the places where the needles will rest. I am not ripping out. I am compensating. There are times to rip and times to compensate. There are also times to go to bed when one is bleary-eyed, as I should be old enough to know.

Anyway, I'm going to continue to work on this tonight for awhile longer.