It's a Grandma bag

We have traveled to visit The Flash and his parents for the week-end. When he slows down enough to take a picture, I'll try to get one of him with his new buzz cut for summer.

They came to our hotel to visit a bit last night after our rather long and arduous trek (not sure what caused the hold-up on the highway yesterday, but there were about 45 minutes of easing up and coming to a dead stop, simply to cover less than a ten-mile stretch of road).  The Flash saw my red tote bag which on occasion has dispersed goodies to the young gentleman.

But not this time.  He peered inside and looked at me with some disappointment in his voice.  "It's just a Grandma bag," he said.

Apparently this is what a Grandma bag contains: 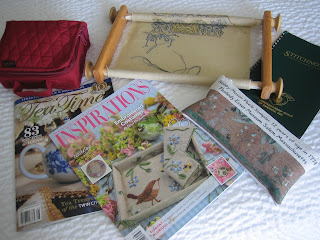 (The goodies were packed elsewhere.)

And, oh, dear, it does look like what a genteel lady would pack. I seem to have lost my edge somewhere.

Hopefully I found it again. One of the reasons we came this particular week-end, other than the heavens were in alignment as were the work schedules of the two men in the family, is that this is the week-end of Festivall with an arts and crafts fair in the capitol city of West Virginia.

And this is what I cajoled Dearly Beloved into buying for me: 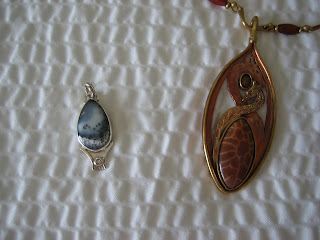 ﻿
Grandpa (aka Dearly Beloved) needed a nap after the morning's perambulations but we are heading back to stay The Flash so his parents can go to a movie.  The Grandma bag is going, too, although I doubt there will be any more stitches added to Ann Scutt.  I'm just about back to the spot I was in when I discovered the major counting error earlier. 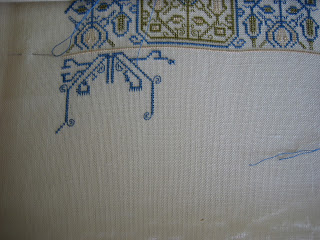