Sleeping and some stitching

Apparently I have been wearier than I thought.

I slept in yesterday. My usual version of sleeping in on Saturday morning means I get up between 7:30 and 8. Yesterday it meant that I slept until almost noon.

Dearly Beloved mentioned that he checked to make sure I was still breathing since I never do something like this, then he tiptoed around because if I was sleeping this soundly, obviously I needed the sleep.   Actually, I had places to go and people to see. I went no place and saw no one--other than Dearly Beloved, of course.

However, I did get some stitching done when I finally staggered out of bed.

(Staggering is a good description.  When I was in my twenties, I had a friend in her fifties who told me she could never sleep in because she started hurting if she stayed in bed too long.  At the time, I thought that was the weirdest thing I had heard from one of my "elders" in a long time.  Now I understand exactly what she meant.) 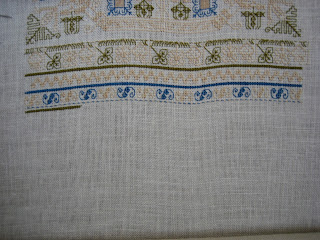 I've been trying to figure out exactly how I got the linen mounted so crookedly on the scroll bars, but it hasn't bothered me enough to remount it. When I take the side bars off and let it hang, it straightens out.

I also started stitching the motifs for Rhapsody in Blue: 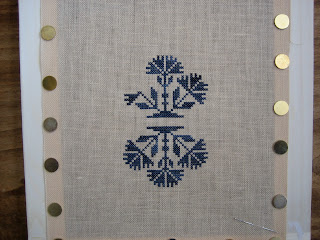 Yep, it's on stretcher bars. Even with all the body in the linen and the fact that's it's totally cross stitch, my stitches are ever so much prettier when the linen is mounted. It also means that the necessity for ironing the piece to within an inch of its life--not a terribly good thing to have to do with overdyed silk--is gone. And I can use both hands to stitch, which means that one hand doesn't cramp holding the linen.
Posted by Ann at 11:14 AM