Aside from rocking and drooling in the corner . . .

I have managed to stitch a little this week.

I started the framework for the next band of Ann Scutt: 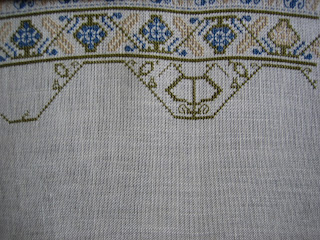 And I started more of the outlining for the cartouche for Eve in the Garden of Eden: 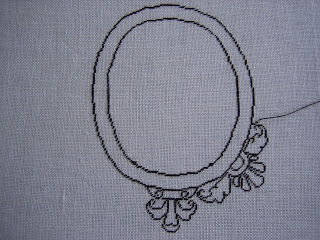 I seem to be doing a lot of outlining.

We are continuing the battle of technology. With the last week of the quarter here, the system I use at work went down. Again.  I thought about having a screaming, raving fit, then decided that would do no good whatsoever, other than enlivening our corner of Cube City, so I did some deep breathing and reconciled myself to working some long hours next week so we can get our reports done.  As luck would have it, the meeting at which I present these results has been postponed for a week, so I now have another week to get everything done. I believe it was karma rewarding me for deep breathing instead of having a hissy fit.

And then, last night, a water main in our neighborhood broke. Thus we had no water from about 9 on. (Luckily I had taken my shower early!!!) Teeth have been brushed and faces washed with bottled water, there are bottles of hand sanitizer scattered around the house, and the dishes from last night's dinner and this morning's breakfast are in the sink. We are going out to dinner tonight. We have been reassured that we will have water by tonight before bedtime. That cannot happen too soon, since some of the few things I like about living in the 21st century involve modern medicine and indoor plumbing. Nothing more needs to be said.

Meanwhile, I plan to continue outlining.
Posted by Ann at 1:02 PM