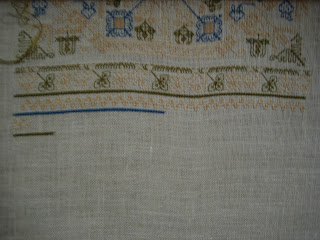 I took the day off on Monday to do laundry and all the other stuff that usually gets done on the week-end . . .but I wasn't home on the week-end to do them. However, the sun was shining brightly (which hasn't happened often this gray, gloomy winter) and it seemed like a very good idea to stitch while the washer and dryer were churning away.

So I managed to stitch Ann Scutt's Band 7, the first repetition of Band 8 (it's a Montenegrin band that will be repeated as a dividing band for the rest of the sampler), and Band 9--and part of Band 8 (again) and Band 10.  And, hallelujah--there was no reverse stitching!

Had Ann misbehaved on these bands as she did on Band 6, she might have been placed in time-out indefinitely. But she behaved very nicely and will stay out to play with a couple of other things that I need to work on in the next couple of weeks.

That is, assuming I have time or energy to stitch. I walked into work on Tuesday to find that my email and inbox had exploded. I have worked late a couple of nights, plus had our sampler guild meeting last night, so stitching time has been nonexistent.

And I am starting to twitch. The week-end cannot come too soon.
Posted by Ann at 4:16 PM