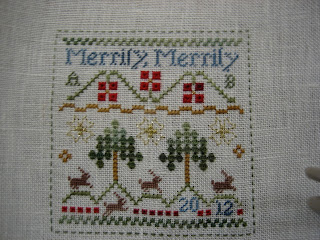 The embroidery for Merrily, Merrily is complete.

Not without some angst.

There are three gold flowers across the center which are stitched in gold metallic thread. The thread that came in the kit was just a wee bit fragile.

Actually, it was very fragile. Despite changing needles and using beeswax to strengthen the thread, it snapped and broke and the covering stripped and I said some very ugly words (also known as "technical terms") and tossed the thread in the trash.

This led to some quick stash-diving and the resulting discovery of a spool of an old DMC thread. It has three plies that split when you don't want them to. I decided one ply would be the right weight, so I decided to tease out single plies to use on this area.  The thread that easily splits when you don't want it to becomes stubborn when you need it to split. There were more technical terms used, but at last I had three separate threads and I was able to get the bloody flowers stitched.

Now comes the finishing, which I believe is covered in the last lesson, due to be posted tomorrow at some point. I was tempted to go ahead and do my own thing, but then decided that I had paid for the course so I should at least read over the finishing instructions before I go sallying forth on my own. Hopefully the next time you see this, it will be hanging on the tree.
Posted by Ann at 5:18 PM