I spent the week-end with Baby Girl.

We went to a meeting of the Piedmont Heritage Sampler Guild (a breakfast get-together so we could have a Saturday before Christmas mostly free for Christmas-related errands). It was so much fun--I look forward to the next meeting which will be in February.

We went home, picked up one of her best friends, and hit one of the malls to do some shopping.  As it would happen, we needed to be in the far north part of the mall. The only parking we could find was in the far south. It's a large mall.  We did a lot of walking. Luckily I had my cane with me so the wonky knees were not too terribly displeased.  We also had a chair massage in the middle of the mall, which is a surreal experience to have occur with people wandering by. However, I was limp as a rag after only a few minutes--such relaxation--and I now know how a lump of bread dough feels being kneaded.

Originally we had planned to go to a movie. We decided we would likely go to sleep if we sat in a dark room for any length of time, so we went back to Baby Girl's place and watched DVDs in a well-lit room instead. We also went out to dinner, came back and went to bed relatively early for one of our week-ends.

During all of this, I did manage to stitch. Bet you didn't expect that! 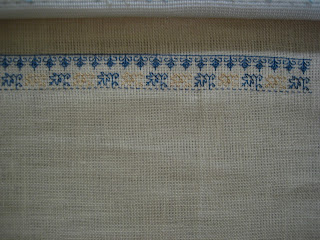 This is band 2 of Anne Scutt from Scarlet Letter.

This morning I woke up, got up, packed up, and left. This was the day that Dearly Beloved and I designated to get our Christmas tree.

It is currently sitting in the corner of the living room in the stand, nicely watered. It is not decorated, although that was on my list of things to do this afternoon. Dearly Beloved is having an issue with the lights. It appears that he placed the lights on the tree so that the plug which needs to be inserted in a socket for the lights to light is not in a location that would enable it to be inserted in said socket. I vetoed the use of a bright orange extension cord, orange not being a traditional Christmas color. Dearly Beloved has decided that he is not interested in pursuing light placement for the moment. This means that I may as well do something else. I think I'll stitch.
Posted by Ann at 4:47 PM