I must believe in monogamy. After all, I've been married to Dearly Beloved to almost 45 years. When I retire June 1 (but who's counting?) I will have taken pay checks from the same company for almost 21 years. I've lived in the same place for 30 years.

But I have never been monogamous in my needlework. I zip from one project to another like a hyperactive bumblebee. This may account for the huge number of UFO's and all the projects waiting to be finish-finished.

Until recently. The last three projects I've worked on, I've stuck to.

This is what I've done on the Etui since I wrote last: 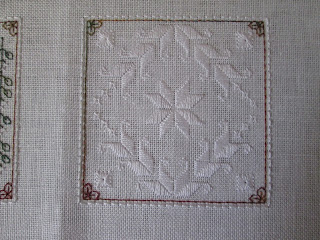 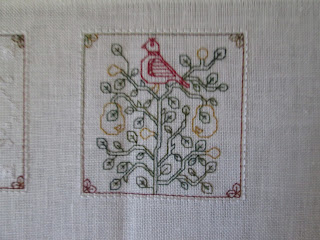 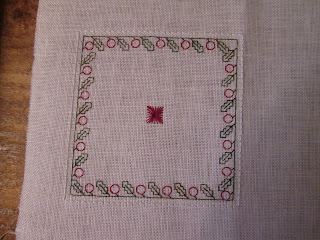 I have seriously thought about doing spiral trellis inside the berries around the top of the lid. I'm trying to take deep breaths and get over that thought.
Now I do have to admit that I was slightly distracted from stitching this week. I was in the middle of the latest John Sandford Prey book and things were starting to happen fast. I could either trade my stitching time for reading time, or I would be up until 3 a.m. on a school night--er, work night--finishing the book. So I read instead of stitching.
And I originally planned to do some finish-finishing today, to the point I pulled out the project I was planning to do and read over the assembly directions.
But apparently monogamy is winning, I'm going to work on another side for the Etui.