There has been some stitching this week.

First off, I finally got one side of the threadwinder case for Amy Mitten's Casket Toys stitched. 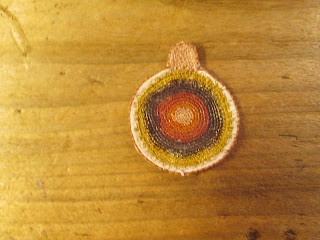 This was not without travail.

I started this awhile back--you may remember--and while I was working the part that has a metallic thread, the thread looped up on itself and knotted into a big mess that I was trying to untangle and somehow in all that, the metallic wrap broke and came away from the base thread. So I heaved a sigh and started very carefully trying to remove the stitches. And at that point, the template tore along the line of holes I had stuck in it to set up the outside rim--just like I had planned to perforate the paper for tearing instead of using it as a guideline.

I heaved another sigh and emailed Amy Mitten, who kindly sent me another template. This time I put two layers of packing tape on the template. And I very carefully worked the circle. For some reason, it looks wonky in the picture. It doesn't look quite so wonky in person. I think the gold metal loops are sticking up on one side and that's causing the wonk. And is wonk a word?

I also went back to Frances Burwell: 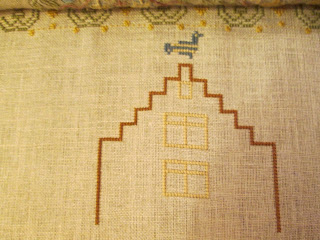 It appears that I have to build a house on just about every sampler I stitch. Oh, and the bird will have another leg and a foot on this one. I just didn't want to thread up the needle to do about half a dozen stitches.

However, to distract me from building a house, this lovely thing arrived: 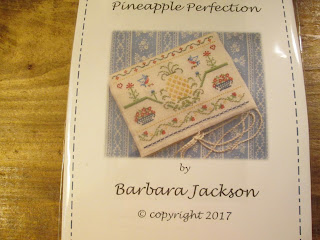 I do love me a Barbara Jackson design, and as soon as I find four stretcher bars that will cooperate with each other, I'm starting on this.

Meanwhile, I'm supposed to be heading out to the first meeting of our year with the Carolina Sampler Guild. I do not believe I'm going to get there, because we are getting up at o'dark-thirty to leave for Ocean City, Maryland and classes with Jackie du Plessis. There are still things that need to be done before we leave, and it would be nice to get some sleep before we toddle off down the road.

Hopefully our trip will be less eventful than the last time--we will do our best to avoid deer, whether dead or alive.