While we were dodging the bullet with Hurricane Frances, I starting stitching bricks on Frances Burwell.

As many bricks as I have laid on sampler houses in the last few years, I should be a master mason by now. 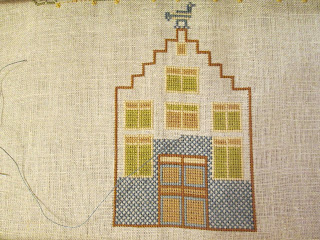 I have also ironed and mounted the linen for about half a dozen other projects, which I would show but the pictures just show linen attached to either stretcher bars or scroll frames.  I was planning to dive headfirst into a massive stitching frenzy and was getting the prep part for a bunch of things out of the way.

And then things changed, and I probably won't be stitching or blogging for a week or so.

Mother went back to the hospital a couple of weeks ago due to severe dehydration. She was released to rehab after several days of rehydration. It has been determined that, even with assistance, she can no longer live in her apartment and needs to go into long-term care. This means we need to clear out her apartment by the end of the month, which means that both The Saint and I are doing some furniture rearranging so we can move some of the family pieces into our homes.  This week-end is the major rearranging part, next week-end is the moving part.

Meanwhile, we have noticed some major personality and behavioral changes in Mother.

For one thing, the filters are all gone. Completely. Whatever pops in her head pops right out of her mouth.

And what pops out of her mouth is quite frequently profane. The Saint and I had no idea that mother knew some of the words she knows. And this is after years and years of being lectured that Improper Language isn't necessary if you have an adequate vocabulary and its usage simply lowers you to the level of the Beasts.

But there is something that tops all that.

My prim-and-proper, excessively reserved, and incredibly modest mother has taken up streaking.

While using a walker.