I was so excited about finishing Eve's embroidery that I forgot to mention the pretty things that came my way this past week-end. 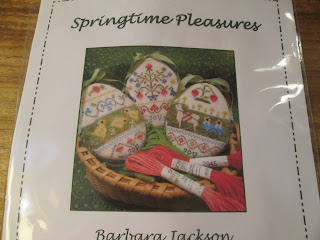 I do not believe Barbara Jackson could design anything that I wouldn't want to stitch--and this one caused me to go above and beyond. I literally had to chase down our mail carrier to find out where he'd left the package. He has misread the house number and left it at a neighbor's. It was retrieved, and all is well, and I have the Shining Needle Society class starting soon to look forward to.

And at the tea, I added two more projects to my list: 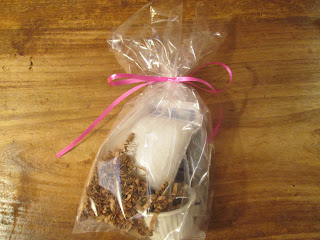 Inside this little bag are the makings for the Bluebird of Happiness. I had to miss the regularly scheduled sampler guild meeting last week where this was the program. I plan to dive into this very soon. 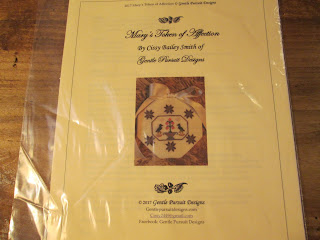 And we received this "token of affection" as part of the festivities at the tea on Saturday. The motif comes from the Mary Drake sampler owned by Cissy Smith, who was our lecturer and honored guest at the tea. It turns into a needlebook. 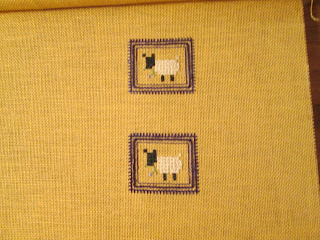 There has been a wee bit of stitching. The spring lambs for the scissor fob are completed--now I just have to do the main piece of the needlebook and put it all together. Something else to put together . . .

There would be more stitching, but we have had a domestic disaster. The dishwasher has died. Again. It was fixed a month or so ago, but the part that was jiggled to make it work apparently unjiggled itself. Our friendly handyman is trying to get a part, but it's an old, old, old dishwasher and he is not optimistic--so we may be investing in a new machine. And a new cabinet to put it in because it seems that the new models will not fit into the hole that the old one currently takes up. Which may mean some kitchen remodeling. This was not in my plans for the year.

So currently, I have been washing dishes by hand in the smallest kitchen sink found outside a camper. We believe that whoever designed the kitchens in this community believed that people who live in townhouses do not eat at home but dine out for every meal.

Or use paper plates constantly.

Anyway, I'm spending part of my evenings up to my elbows in dishwater and the remaining part slathered up to the elbows with heavy-duty hand cream so that I could possibly work on silk at some point in the future without totally shredding it.

As Baby Girl would say, it's a First World Problem.

But I am going to kiss whoever fixes or replaces the dishwasher right slap on the mouth.
Posted by Ann at 4:48 PM