Last night I decided to start on the background of the front of Eve in the Garden.

The first strand of gold thread I tried to use twisted and tangled, and about half the gilt stripped off. Technical terms* were hurled about. Sadly, if you've been following Eve's progress, you will remember that I've had problems with the gold thread from the get-go.  I've tried stitching with a Japanese, handmade needle. I've tried large needles to make the holes in the linen larger. I've tried smaller needles, just to see if that would help. I'd gotten down to working with 10" lengths of thread, which meant constant starting and stopping.

While I was trying to decide what to do with Eve, I was puttering around doing nothing much of anything, when a tiny voice from deep in my lizard brain whispered, "What about waxing the thread?"

No tangling. No snarling. No twisting. Very, very little stripping of gilt. And I could use 15-18" lengths of thread without horrible things happening.

And I have this much done: 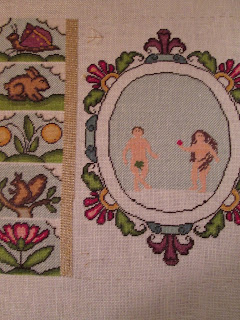 Based on previous experience, this would have taken me at least three evenings to stitch. It took about an hour last night, and a couple of hours tonight.

If I didn't have something that I really need to work on this week-end instead of Eve, I would continue with the background. I am going to be resolute and do what I have to do--but I'm going to move on with Eve after that.

*If you've been reading this blog for any length of time, you will remember that "technical terms" refers to language that is not normally considered acceptable in polite company.
Posted by Ann at 7:25 PM