PhD's and other things

In my local EGA chapter, we have a PhD program--which stands for "Project half Done." Each year we get to pick up to three projects we want to complete in the coming year. For each one we complete, we get a chance to win the drawing for a gift certificate to one of the local shops. If we don't get something on our list completed, we have the option to roll it over into the next year.

I've been rolling mine over for three years. One of them is complete, but I put it in a safe place and can't lay my hands on it at the moment. One of them is stitched but not assembled. And then there is Eve.

I've been putzing around with this project since 2010. I want to do the fun stuff on it. I have to get past the background before I can get to the fun stuff. And that background has been the albatross around my neck.

This is my busy time at work. And I'm still getting over the plague (cough, cough, whine, whine). So I've been using up my energy and what brain power I have at my job, then coming home to fall over in the wing chair.

Well, this is not productive.

So Monday night I picked Eve up and did a few strands of gold. And then a few more. And I have found my busy season/plague recovery project. 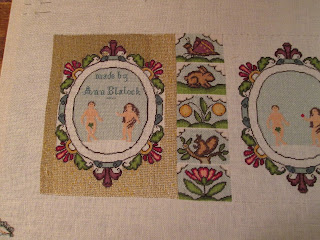 Except for filling in the curlicues around the center design, I have one side complete!

And now I have some momentum going, and I'm going to start the other side's background (once the curlicues are filled in--and leaving them to last is not a mistake I'll make on the other side!).

The only problem with this is that it's about as boring to post progress pictures as it is to watch grass grow and paint dry. And I think I might get burned out (again) if I don't take a break once in a while. So on the week-ends, I'm going to do other things.

One of them may be this: 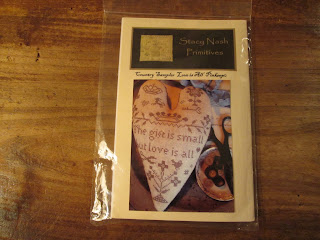 I won one of the door prizes at last evening's sampler guild meeting! And how appropriate for February and Valentine's Day! And it's a complete kit so I don't have to scramble for the bits and pieces to use--it even includes the backing fabric!

Since every time I plan a stitching routine, I fail miserably within two weeks, it will be interesting to see how this goes.

But right now, I think I'll go and stitch another strand or two of gold thread.
Posted by Ann at 5:53 PM