This is where I was when Ann Wheatley almost became the world's most elegant dust rag. 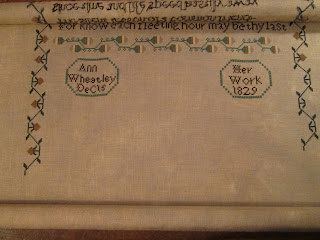 I started stitching this sampler in 2011. Apparently I miscounted the very beginning of the border on the left side. I discovered this fact last night. That may be why I put it down in 2011 and didn't pick it up until now. I had to have time to repress the memory.

To fix it, I would have to rip out almost all of the border on the left side, two motifs in the upper left corner, and the cartouche on the left side.  This is when I considered turning it into a dust rag.

I have studied the chart and figured I could fiddle and finagle and get the borders to line up anyway. So, as Edy suggested in the comments on the last posting, I am now stitching an adaptation of Ann Wheatley instead of a reproduction.
Posted by Ann at 2:25 PM