October Minus the Seventh

I was talking with the Big Kid the other night, and he announced that September had been such an overall crappy month for him that he had decided to close it out and go on to October--so the evening on which we were talking was October Minus the Ninth.

Now most of my September wasn't horrible, but the last week has not been pleasant for a variety of reasons, so I've decided to go with him and move onto to October myself.

We have been doing a major clean up and clear out of the room we call Dearly Beloved's office but where I am also guilty of putting stuff and forgetting about it, so there hasn't been much stitching this week. And what little there has been has resulted in taking out as much as I've stitched in--if there's been a way to miscount or stitch in the wrong color, I've done it. Here's Ann Wheatley at the moment: 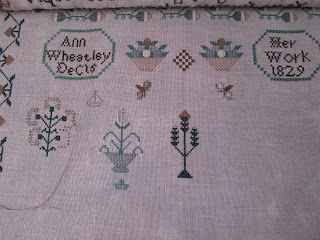 Dearly Beloved has asked why I don't work on something else instead, but I'm to the last third of the sampler and at this point, I just want to get it done.

But we still have a lot to do in the office--who needs to keep 30-year-old checks from banks that no longer exist?--Dearly Beloved, that's who--so I doubt I'll get much stitching time this week-end.
Posted by Ann at 8:18 AM