Never try to count if you're feverish

Earlier this week, I was a little under the weather.

Not in the pale, wan, romantic way in which one reclines upon a chaise longue while a dear caretaker brings one toast and weak tea in china on a silver tray with a rose in a bud vase . . .although I'm sure Dearly Beloved would have made the attempt had I asked. Of course, I would have had to tell him where to find a tray and a bud vase, and the tea he brews is generally strong enough to conquer nations and build empires, but he would have tried.

Instead I had the chills and fever kind where you sip ginger ale slowly and hope it stays where it's supposed to.  Since I didn't think it was fair to my coworkers to bring the Plague to share with them, I stayed home.

What I should have done is curl up in my blankets and marathon old movies, but I figured I had time at home to stitch so I should do that.

I swear I counted the outline for the first bit on this prework project four times and used pins to mark everything before I started to stitch. And immediately after stitching the first frame, I used it to mark off the parameters for the second outline, which I then stitched.

And after doing all that stitching, I found I was a thread off.

As I didn't have enough energy to rant and rave, I mumbled a few choice words under my breath, then decided that I could ease in 1/32 of an inch when I put things together.

And since then I have stitched the inside designs and more or less recovered. And this is where I am as of today: 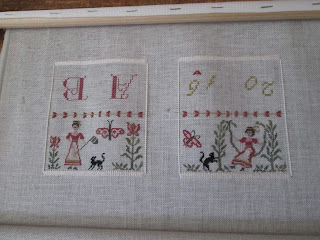