I've started the prework for The Un-Played Piano Etui, a class I'll take from Jackie du Plessis in July. 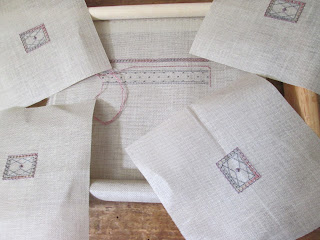 And then there was the Great Scroll Bar Hunt. Because of the stitches involved, I wanted to put the panel on scroll bars rather than work in hand. This led to spending an entire evening digging through the stash in search of scroll bars that were not otherwise involved in something. Eventually I realized that I was going to have to take something off a set of bars in order to work on this project. That's painful--after spending the time to sew the linen to the bars, taking it off hurts!

The search resulted in A Moment of Utter Clarity. I have too many things started.

And that moment resulted in A Moment of Total Insanity.  I need to get all these things stitched. To do this will require Discipline and Diligence.

I might even have to work out a rotation system.

If you've been reading this blog for any length of time, you know I don't succeed with rotations, and when it comes to Diligence and Discipline, I have none at all when it comes to needlework.

I am thinking, though, of trying again, once I have the prework for the next two workshops finished.

I give myself about a month before I start flitting around projects again like a deranged butterfly.

And I may need to invest in yet more scroll bars.
Posted by Ann at 8:22 AM