All day today, while I was at work, in between emails and phone calls and correspondence and a couple of mini-conferences with coworkers, I was thinking about spending this evening with a needle in my hand. Quite frankly, those thoughts got me through a couple of phone calls and several emails.

Last night, you see, the reversible pattern for the band I'm stitching on Mary Atwood clicked in my pointed little head. I got part of a motif finished and then went to a sampler guild meeting. By the time I got home, it was time to get ready for today, so I didn't get anything more done.

Ah, I thought, Thursday night has nothing planned, other than a quick errand after work. Dinner is taken care of (Thursday night is pizza night). All I have to do is come home, drop my briefcase and purse, and stitch away.

The errand, to pick up my new glasses (again), took longer than anticipated because apparently half the county also use the same facility I do and all of them also needed to pick up glasses.

Then I realized that perhaps I should put gas in the car so I could get home.

Then I arrived home to discover that Dearly Beloved, who has been doing the grocery shopping ever since he discovered you get an additional discount for being aged if you shop on Thursday, forgot to pick up a pizza. This meant grabbing some stuff for a desperation dinner and throwing it together.

And then, I talked to Mother, The Saint, and Baby Girl on the phone--not that I mind that at all, but I can't balance the cell phone on my shoulder and stitch without hanging up on someone.

I finally threaded my needle hours after originally planned and this is what I did. 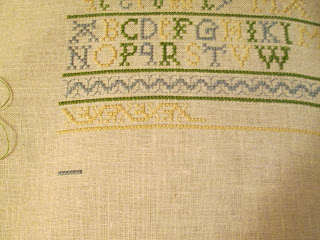 I can say I'm almost halfway across. Almost. Not all the way to the end of the band, but almost to the halfway point. And I've counted down very carefully and put a few stitches into the next dividing band.

I might have done a little more, but this arrived today. 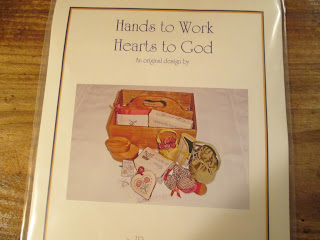 I'm taking this class from Jackie du Plessis in March and we have prestitching.  And, yes, I seem to be stalking Jackie this year. Several of her classes that I have wanted for years are being taught at a variety of venues, along with the new ones she is introducing this year, so I'm wandering around the country and stitching smalls.

But first, I want to finish that band on Mary Atwood.