Backwards, forwards, and upside down

I pulled Mary Atwood out of her pillowcase last night. 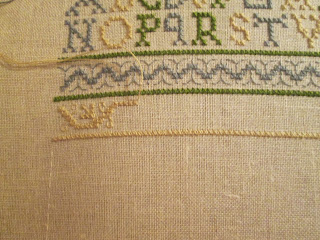 It made sense to pick this one. I have 24 out of 36 bands finished, so I'm only a third of the way from a finish. But it's been awhile since I've been immersed in the 17th century, and it's taking some adjustment.

For one thing, I had to get used to working over three threads instead of two. This led me to wonder why and when we went from stitching over three to stitching over two. Did some highly influential personage in the Broderers Guild announce one day that this was the proper way to stitch?  Was the ability to spin very fine threads and weave very fine linen lost? That could result in lower counts of linen. If you work over three threads on a lower count, you end up with a bed sheet instead of a sampler--the first time I saw the original Loara Standish sampler I was amazed by how tiny it was.

Then, there is the reversibility factor. If you're going to make your sampler completely reversible, you have to turn it sideways and upside down to make it easier to work. This can be very liberating, but there are times when you're looking at the chart turned one way and the work turned another and bringing the two together takes some thought.

Actually, after a long day at work yesterday, spending an hour on Mary made my brain hurt. I don't mean that I had a headache, I mean that my frontal lobes were begging for mercy.  I am assuming that was caused by the development of new neural pathways through my aging brain.

I don't know if I can take more neural pathway development tonight. I think I may work on Eve's background, which just requires patience. I may have some of that.
Posted by Ann at 4:38 PM