It is raining again. It has been raining now for two weeks, with the exception of this past Wednesday when a glowing ball of fire appeared in the sky for a brief time--we were told it is called "The Sun"--then it was covered by clouds again.

Joaquin is not supposed to hit our coast, but he has taken care of the severe drought we were in and then some. We have literally gone from severe drought to super-saturated soil in two weeks.

So I plan to stay in and stitch and finish this week-end. I got a good start last night. 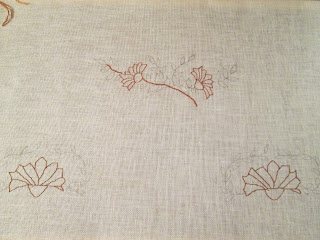 The flowers are outlined and I have one stem worked for Chrysanthemums in Autumn, which seems like a particularly appropriate piece to stitch at the moment. I'd like to get the rest of the stems done tonight.

The plan, subject to change at a moment's notice, is to finish another project from the finishing basket tomorrow, then to work on background for Eve in the Garden for the rest of the week-end. Then I'll decide what I feel like doing after that.

Or, as one of my co-workers suggested today, this would be an excellent week-end to live in ones jammies and watch stupid TV.
Posted by Ann at 3:24 PM