It was a dark and stormy day

I think I should have just crawled back into bed this morning and pulled the covers over my head.

After yesterday's finishing debacle, it was obvious that I needed to do something other than attempt to stitch, but I am stubborn and pigheaded and contrary. I had already decided that Sunday was going to be the day I would spend hours working on the background for Eve in the Garden, so I set her up on the frame stand.

And one of the knobs, which had separated earlier in the week, came apart again. The knob that holds the screw that holds one of the arms is no longer connected to the screw. We had tried gluing it together, but it isn't going to hold. Not even with epoxy.

So I decided to work with the frame propped up on my knees and that was working sort of OK, when the skies darkened. Again. With more rain. And then the power went off. Until about 15 minutes ago. I gave up on trying to stitch gold thread with no illumination. And now it's time to get ready for the week to come.

Luckily I do have something to show for the week-end: 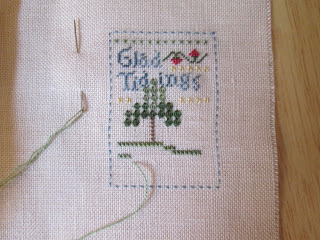 Yesterday the holiday brochure from Colonial Williamsburg arrived,which put me in the mood to dig out one of the Barbara Jackson ornaments I bought at Haus Tirol last year. I still have two more to stitch from that expedition, and the new one from SNS should arrive soon.

Hopefully the sun will arrive soon, too.
Posted by Ann at 3:33 PM