I am cranky. This has been one of those weeks. Baby Girl says they're all First World Problems. I prefer to think I'm being nibbled to death by ducks again.

I had to buy a new phone. My cute little red phone is too old and the battery it needs isn't made any longer. I did not get a smart phone. I got a stupid phone, which is all I wanted, but I have been getting grief about it from the more tech-savvy people in my life. It was referred to as a Granny phone. I replied that I am a Granny, so shut up.

I had planned to be at Salty Yarns this week-end, finally putting The Gift together. There was a work situation, and I could not figure out any combination of planes, trains, and automobiles that could get me there and back fast enough for me to attend enough of the class to know what I'm doing. I love the workshops at Salty Yarns and was really looking forward to this one, especially since I've had the stitching done on The Gift for years.

Of course, Baby Girl was going to go with me, but she came home from Dragoncon with Con Crud and has not been able to breathe through her nose for several days. I've recommended egg drop soup and have been glad I haven't been in a car with her and her germs for an extended period of time.

And tomorrow I'm going to spend the day with Mother, who is showing marked signs of improvement despite herself. I mentioned to The Saint that I had always figured Mother would outlast both of us. The Saint replied that she may well do that because the stress of dealing with her is going to kill us both.

There have been some silver linings to these clouds. I made time after work to stitch, and the tent stitch on one of Eve in the Garden's cartouches is complete. 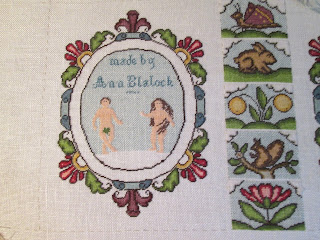 I have dated it so I have to finish it by year's end. Granted, I dated it in very tiny numerals, Roman numerals at that, but it's dated.

And the mail carrier was very, very good to me today: 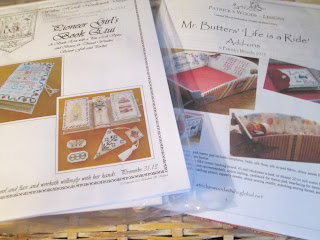 The Swan Sampler Guild had Betsy Morgan come to teach her new Pioneer Girl's Book Etui, and since they are very good to away-Swans, I was able to "ghost" the class.

And Sherri Jones of Patrick's Woods offered add-ons to the Mr. Butters class I took through Shining Needle, which of course I had to have.

(Enabling report: SNS is also offering a new Christmas ornament from Barbara Jackson of Tristan Brooks. Yes, I've signed up. And, yes, the previous three designs are also being offered. Which reminds me, I need to put last year's ornament together. And I need to assemble the Shepherdess Tray. Along with everything else in the finishing basket.)

As I am taking a picnic lunch to Mother tomorrow so she won't have to eat in the dining hall, I won't get to stitch on any of that tonight. I will be in the kitchen instead.

Actually, having eaten in her dining hall, I'm doing this as much for myself as for her.