Clawing back to normal?

We're still not quite to a normal state around here, but we're working on it!

I had to put in some long hours at work last week, but managed to fit in some stitching late at night. When you're working on a simple background stitch, it is amazing how quickly stress can be alleviated! 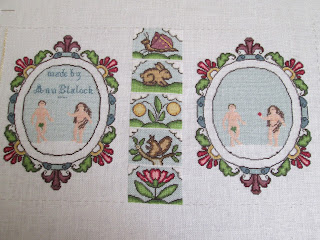 There will be a tree in the middle of the cartouche that belongs to the front of the box. Actually, there was supposed to be a tree on the back as well, but I have a feeling that this will be displayed flat more often than not. The tree is worked in silk purl with a raised stitch for the leaves. The more I thought about it, the more I realized the bottom would be smooshed (technical term), so I went with the attribution instead.

There will be more stress-reduction stitching in the future. I've started on the background stitch for the front and the back. 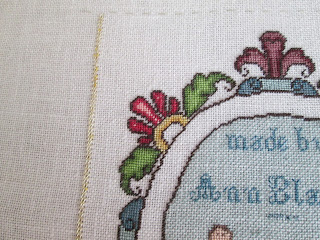 That, dear friends, is two rows of background. It's basically an encroaching Gobelin stitch worked over one thread. I think it's going to be just the mindless work I need for awhile longer. Of course, for viewers, it's about as interesting as watching grass grow and paint dry, but it is what it is. I'm trying to work everything on the project in the order it's given since I have a feeling it was laid out that way for a reason.

And I did get a tiny bit of finishing done yesterday: 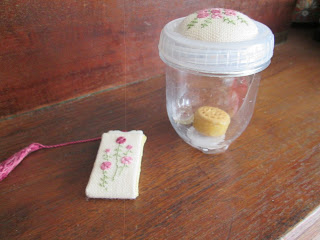 On the left is the thread winder holder that goes with Fair Maiden, and on the right is a pincushion-topped container, which I am using to store the waxer that Jackie gave us. I only have one piece left to assemble and this entire set will be complete.

On the Mother Front, this has been a week. The Saint went to the beach for a few days, a trip planned for months and which she well deserved. Mother decided that I need to retire immediately so I could be available 24/7. I explained that I generally enjoy my job, that I'm not ready to retire, and that I will probably work a few years beyond standard retirement age because as long as I work, Dearly Beloved will work and he needs the structure or he will turn into a permanent lump on the couch. Besides, it would take longer than the few days The Saint would be gone to set up Social Security and give notice. This was not acceptable.

I am making a list of things NOT to do when (and if) I become an aged parent. As opposed to the only-slightly-aged parent I am currently.
Posted by Ann at 9:58 AM