There was very little needlework going on this week-end: 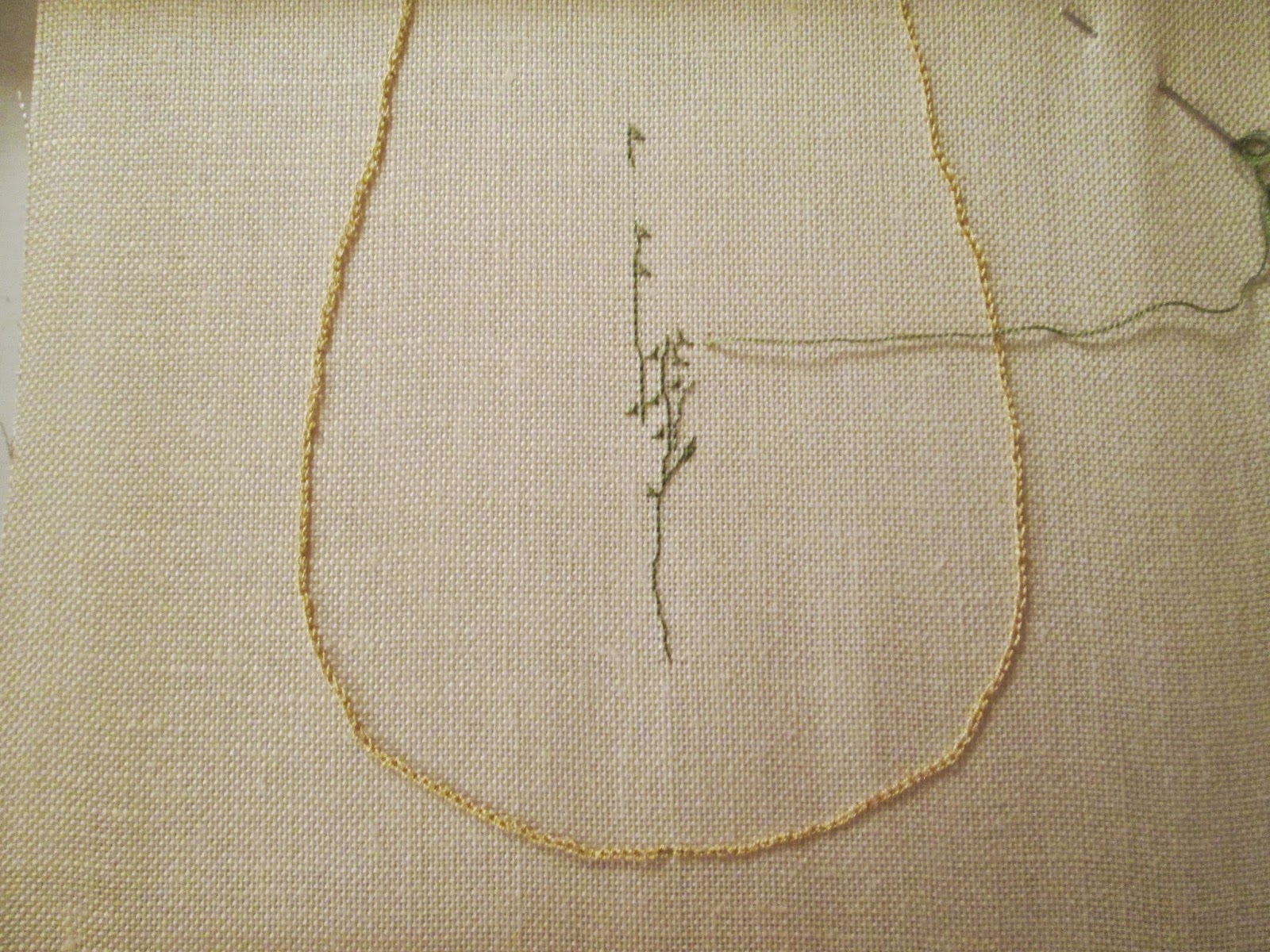 I made it all around the front of the bag for the Fair Maiden's project and started the stems for the roses. There were a few tense moments when I did not think the two sides of the bag were going to meet in the center of the bottom. Actually, there were more than a few--but they did meet and a major sigh of relief was heaved.

This was all the stitching I did because Baby Girl and I went gallivanting yesterday. There are two sites near Jamestown and Williamsburg that I've wanted to explore for quite some time, and Baby Girl was up for a road trip.

So, fortified by fast food breakfast biscuits, we headed out early to the great state of Virginia to visit Bacon's Castle and Smith's Fort.

You will be expecting pictures. You won't get them this time. I left home without my camera. Baby Girl said, not to worry, we could use hers. Her camera battery was dead, which we discovered when we arrived at Bacon's Castle.

Anyway, Bacon's Castle is one of three surviving Jacobean brick houses left in the Western Hemisphere. The other two are in Barbados. The house was in possession of only three families in its almost 350 year history, and each generation left its stamp on the dwelling. For example there is an Italianate addition on one side, built by one of the families in the 1800's.

However, they do have one room set up as it would have been in the 1600's when the house was the talk of the countryside--one room in the house would have been larger than the average entire home at that time. Plus it had four floors under one roof, another amazing thing for the early colonial period.

Another room is decorated as it was in the mid-1700's when the owner updated the house to reflect the Georgian style popular in the new capitol, Williamsburg.

We had hoped for stitched textiles, but there was only one and I believe it was in the wrong place. There was an "Irish stitch" pocketbook in the 1600's room and I don't think those were popular until the 1700's. This is something to research further.

The bare bones of an English pleasure garden can be found at one side of  the house. There is also one surviving house that would have been used by the slaves, the only one of nineteen that were known to be on the property.

And, our docent mentioned that the house would quite probably be featured on an upcoming episode of Ghost Hunters; their crew had visited three times and had some interesting findings.

After that tour, we rode the ferry to the Williamsburg side and had lunch in one of the taverns, then rode the ferry back to the other side of the James and went to Smith's Fort.

This is a mid-1700's Georgian house which would have been typical for a successful farmer or businessman. It was mostly furnished in that style, although they have a striking William & Mary cabinet and a number of chests that date from the 1600's. The thing I really wanted to see, though, was the stumpwork panel found in a corner of one of the upstairs rooms.

This piece is a combination of embroidery and bead work. The embroidery has darkened and faded over the years--the beads are still as vivid as they probably were when they were first stitched to the piece. It also has a wide needlelace band that was probably glorious in its original gold and silver state. That alone was worth the trip.

And we are very probably going to visit both sites again. The next time I promise we'll have a functioning camera!
Posted by Ann at 5:50 PM