I did not mean to neglect the blog for a week, but it's one of the busier times at work for me. After spending the whole day staring at a computer screen, the last thing I've been able to do is stare at one again when I'm (finally, at long last) home.

In fact there have been a couple of days when I've arrived home, done the dinner thing, plopped down in the wing chair, and stared into space--or at the TV, which may be the same thing--until bedtime. It's been a little disconcerting.

That doesn't mean I haven't stitched at all. I've done a little . . .very little . . .especially considering that I'm currently working on little Christmas ornaments.  This is what I managed to do since the last posting. 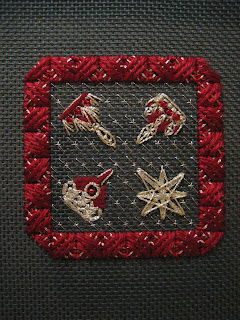 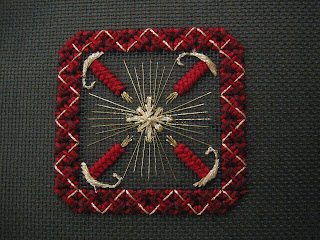 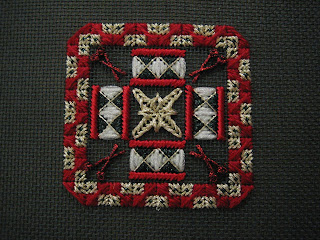 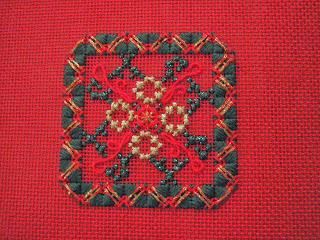 There are two more in the series, but I had to stop stitching yesterday. Tugging the heavy metallic thread through the canvas was making my fingers sore--I am such a fragile flower!

I'm beginning to feel that linen is calling me. After all, I've now spent a couple of months playing with canvas. Morning Has Broken has come back downstairs, and I dug around in the stash until I unearthed Ann Lawle from Scarlet Letter. I think I'm going to stitch on samplers through the long Thanksgiving week-end.

After braving the grocery store this morning to get our Thanksgiving Day provisions, I'm not going out in a crowd on Black Friday, for sure!
Posted by Ann at 5:00 PM