Dearly Beloved was both amazed and amused when I tottered from my chair and performed the Hokey Pokey this afternoon, with gestures, lyrics, and complete movement. I will never be on Dancing with the Stars, but it was definitely a happy dance.

In the Mood Blue is done! 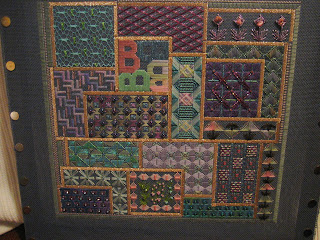 I've been asked about the thread used for the "B's."  The blue one is worked in a metallic thread. The others are worked in AVAS and an overdyed silk. The strands were gently persuaded to lie parallel to each other by use of a laying tool. I've been thinking that they perhaps look a little too heavy and blocky, so I've been thinking of taking them out and either changing the alphabet or using only two strands to make them airier. I'm going to set this somewhere where I can look at it from a distance and see if it still bothers me enough to redo.

However, it's all beaded and bordered and I'm ready to go on to something else.

As I'm still in a canvas mood, I'm going to work on some Christmas ornaments that I found in the stash. They're part of a series designed by Tony Minieri. I stitched the first two years ago and then was distracted by something else. It's time to get a couple more done--I'm not going to say I'll get the whole series finished before this Christmas.

It's a good thing I had decided to do Christmas ornaments since my dear, faithful, and aged Grip-It frame stand has lost its grip. It's had a hard time holding up its head for awhile, but I could prop the edge of the stretcher bars on the arm of the chair and we could muddle along. Now the head  will only tighten up on one side, which meant that occasionally the frame would plunge to the floor, startling me and causing Dearly Beloved to wake with a start. Excuse me, he was not asleep on the corner of the couch, he was simply "resting his eyes." The man has the most rested eyes in the fifty United States.

Anyway, he has been tinkering with it for the last couple of days while I've been stitching away on In the Mood. He's swapped out screws and sanded things and fiddled with the joints and finally pronounced that it was beyond aid.

Somewhere there is a back-up stand, disassembled and in a box, that I can use for awhile. I'm leaning towards getting a K's Creations stand eventually, but that will likely wait until next year.

Meanwhile, I'm off to set up a new canvas.  Don't you just love starting new projects?
Posted by Ann at 5:25 PM