Today I got all the outlining for the two panels that make up the button bag for Ode to Jane Austen.

And I started the butterfly. 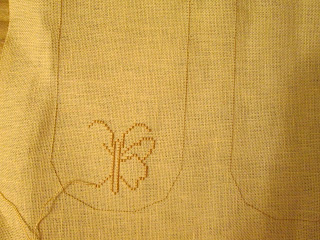 And then I got sucked into a book and didn't come out for four hours.

I was sent an advance reader copy of a book called The Second Home by Christina Clancy. I was going to read a few pages and then do my hour on Abigail Davis.

Didn't happen. I got all involved in the lives of the characters, both past and present. The book is being released June 2, and I predict it will be this year's beach book read. Assuming that we're allowed back to the beaches by then, which would happen if people would just stay inside and away from other people!!!

I am seriously thinking about going through the stash and choosing a project for each day of the week.  Not that I need a break from either of the things I have going, but I need some way to determine which day of the week it is. I came downstairs this morning all a-twitter because I thought I had overslept and was going to start work later than I should. Then I realized Dearly Beloved was reading the Sunday comics.

Maybe a different project every day would help keep me on track.

And this is only the beginning of the second week. I can never retire. . .