The last couple of months, between work and Mother, have been a wee bit stressful. I've been lurching in the house like a brain-dead zombie after work, collapsing in the wing chair, and staring at the TV until it was time to stagger upstairs, just to get up and do it again the next day.

There has been little or no stitching. This is most unlike me.

I realized that the only times I've actually stitched and enjoyed it have been Friday evenings and Sunday afternoons.

As I tend to try to analyze everything to the nth degree, I looked at what I was doing--Jackie du Plessis' Tsubaki on Fridays and Joanne Harvey's Queen stitch needle book on Sundays--and realized that the patterns I've been stitching  have been very repetitive and soothing. Jackie likes to reproduce the look of fabric in some of her projects, and the whole needle book is covered with Queenies, so the patterns are simply lovely and the stitches challenging enough to keep my attention.

This is where I am on each at the moment: 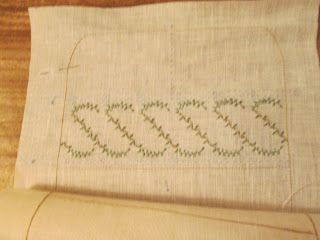 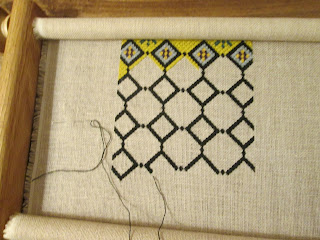 It's all very Zen . . . and I'm going to stick with just these projects for the next bit.

The other thing I realized is that I am on track this year for the fewest projects finished ever. Yes, I keep a list of everything I finish each year. No, I don't know why I do it other than I like lists. Anyway, I was appalled when I looked at this year's list and there is hardly anything on it. Why it matters, I don't know, but it does.

So I decided to see which year had the most projects done. And it was the year that the Big Kid was seven, Baby Girl was two, and Dearly Beloved was traveling all the time for his job.

It was one of those times when nothing ever seems to get done. Just as you fold the last towel and put it in the linen closet, you look at the laundry hamper and discover it's half-full again. You get the last Lego off the living room floor, turn around, and find a whole Fisher Price village, complete with little people and their cars, has risen in the dining room. You get ready to unload the dishwasher, only to find that, while it was running, the gremlins have dirtied another sink full of dishes.

I was talking to one of my neighbors about feeling like a hamster in its wheel, and she emphatically told me I absolutely had to carve out time for myself. She told me that when her kids were little, she got up at four in the morning so she could sew until six when her kids got up. And she told me that everyday when she finished, she took a picture of what she'd done. Then when the day got to her, she could look at her pictures and realize that she was actually accomplishing something.

She was a brilliant woman.

Now I was not going to get up at four for anything less than the opportunity to go on a road trip--but I did have both kids in bed by eight, and I could then give myself permission to stitch until ten. After all, it was obvious that the house was never going to be spotlessly clean until the Munchkins were--well, to be perfectly honest--out of the house completely.

Anyway, that was the year I finished 47 projects. (Do not fall over in amazement. About two dozen of those projects were Christmas ornaments and most of the rest of them were UFO's that didn't need much more stitching to finish.)

And every night I took a Polaroid picture of the results of the evening's stitching, which I kept in a photo album so I could realize that I could actually get something done that stayed done.

I do not anticipate getting 47 projects completed in the next 12 months. I do anticipate allowing myself to relax with needle in hand.

I can't take a Polaroid picture--do they even still make Polaroid cameras any longer?-but I can post a picture on the blog. It will probably be boring for my readers, but it will be a good way for me to keep a record until life settles down again.
Posted by Ann at 7:21 PM