This was another one of those weeks.

I did get a little stitching done--the pin keep pieces for Merry Cox's Sweet Little Blossoms. 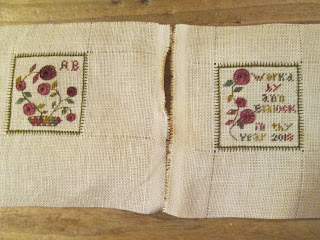 When I first started this, the beginning of the piece reminded me of Ikebana. 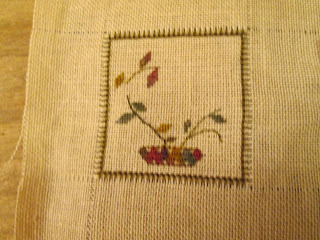 When I was a child, it seemed that every Garden Club member on Mother's side of the family got into Ikebana for awhile. It was very stylized and ritualistic and every element had to be balanced to perfection.

Personally, as much as I appreciate the aesthetic, I liked my other grandmother's approach to flower arrangement much more.

She wandered out into her yard, cut whatever was in bud or bloom with the colors she wanted, brought her haul inside, and plonked the whole thing into a big white ironstone pitcher with a broken spout. I think the only arranging she did was to artfully drape a flower or bit of ivy over what was left of the spout to camouflage the damage.

Perfection may be vastly overrated.

In other news--I do not believe that fall is every going to happen in this part of the country. It is October and the AC is running.  I saw a meme somewhere that described Fall in the South as Pumpkins, Heat, Humidity, Flip Flops, and Shorts--basically Summer with Pumpkins--and I tend to agree.

We just got home from a wedding held in the middle part of South Carolina and it was just like being fried in a cast iron skillet.

We have another wedding week after next--this one in Asheville, NC--we're hoping it's a little cooler. And then we're waiting to hear about the third wedding of the fall which was supposed to be held in New Bern, NC, which Hurricane Florence flooded. We're not sure the venue will reopen in time.

I'll be happy when all these people finally get married and I can get back to stitching on the week-ends.
Posted by Ann at 3:17 PM