I really do know my ABC's

You would have thought I would have been working away on this year's ornament from Rachael Kinnison.

You would be right if I had a free slate frame.

Which I don't at the moment.

Now it is possible to remove something from a slate frame . . . NOT!!!!!  Once I have something mounted, laced, tightened, and set to go, it stays on the slate frame until all the stitching is done. So that means I need to get something finished.

The two prime candidates are the Gentlemen's Nightcap and Rachael's Florentine Ornament, and they're both on my list of current projects. The only problem is that I do better with natural daylight to work on those particular pieces. As I do not believe my employer would be very understanding if I haul in frames, threads, and frame stand in order to work on those projects during working hours, that means they have to wait for the week-ends.

So I've decided to work on smalls during the week and slate frame projects on the week-ends for a bit until I figure out something else.

Last night I started the needlecase for Merry Cox's Sweet Little Blossoms. Because I so love working letters (insert sarcasm font) I decided to do the side with the alphabet first. I had almost finished when it was bedtime. 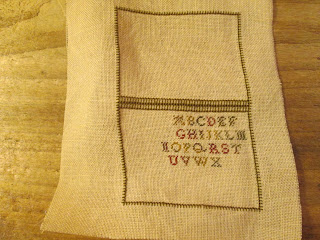 With luck, I'll get the letters done tonight and can go on to the blossoms.
Posted by Ann at 3:45 PM