Yesterday was Stitch in Public Day. My EGA chapter met at a local Starbucks to stitch and socialize.

Meanwhile, Dearly Beloved and I went to visit Mother at her retirement center.

Mother has a new lift chair and they are not cooperating. The main problem is that Mother keeps disconnecting the remote that controls it as well as the plug to the wall that powers it. The Saint and the center's maintenance crew rearranged the furniture to block her from reaching the plug. Mother coerced persuaded her good buddy, who is a little younger and much spryer, to crawl behind the chair and bookcase to unplug everything. They finally put signs on the wall telling her to leave the chair plugged in. This has had no effect on Mother, who keeps trying to unplug stuff, but has kept her friend from "helping" her.

Mother is of the generation that does not waste power. To this day, if she has to "use the facilities" she turns off her TV, even though we've tried to tell her that actually uses more power than leaving it on for the few minutes she's out of the room. We've also tried to tell her that she doesn't have to pay an individual power bill; it's part of her monthly room-and-board fees. She is convinced otherwise.

She is also convinced that the lift chair is going to fling her across the room. Let me tell you, that thing rises so slowly and majestically that she's more likely to slide out of it veeeeeeeeeeery slooooooooowly than to be catapulted.

The Saint has been back and forth ever since the chair arrived to deal with all of this, then she and I decided that perhaps Dearly Beloved might have some influences. Mother is of the generation that believes things more when she hears them from A Man. (This drives The Saint and me to distraction. Don't even get me started on Baby Girl's reaction.)

So, we drove down yesterday and while Dearly Beloved was conducting an informational session on the chair with Mother, I hung out in one of the sitting areas with my stitching. I took my lunch project, which is a crewel piece, that I can work on without additional magnification or lighting.

Let me tell you, if you want to generate interest in needlework, take a vintage Elsa Williams crewel design to a retirement center.

I had taken three stitches when I realized I was surrounded by little old ladies. There was oohing and aahing, which was all very flattering. A lively conversation arose about similar designs that they had stitched when their hands and eyes still allowed them to do so. They were joined by two gentlemen, who talked about their late wives and the needlework they used to do. It was quite unexpected and quite lovely.

This is the piece that created the discussion: 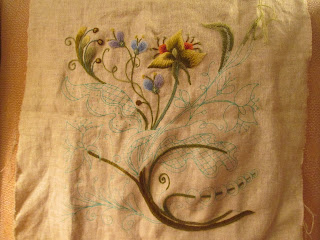 The high point of the day was when one of the ladies told me, "It's so nice to see that young people are embroidering."

I got my Medicare card last year.