This is the day that Dearly Beloved made his appearance on earth.

The man does not like birthdays. He doesn't want cards, birthday salutations, parties, or presents on his birthday. He doesn't even want birthday cake!!!

Yet another reason for me to think he may be an alien life form.

Anyway, we had Chinese delivered on Thursday instead of Friday in honor of his natal anniversary, and then I settled down to stitch for a bit while he looked at the book that somehow appeared in his spot on the couch without wrapping paper or any other fanfare.

And there is the rest of the vine for this side of the border and I've started stitching in the leaves. 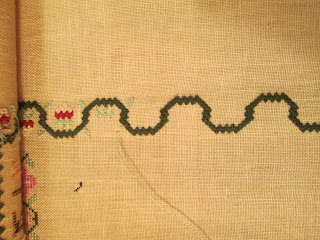