The results of being a klutz

Wednesday evening I returned home from my ANG meeting, having enjoyed myself tremendously as I usually do at that gathering.

Somehow I either tripped over my own two feet or the first step to our front stoop and very nearly did a face plant on the bricks. This would probably have resulted in broken glasses, broken nose, broken teeth, and potentially a broken jaw. Instead, I managed to grab the rail along the steps and avert major disaster.

Instead, I wrenched my back. I didn't realize this--I thought my arm and shoulder bore the brunt--until about three in the morning when my back started to spasm. Muscle relaxers and major pain meds made life somewhat bearable, but very loopy. Having to alternate sleeping in bed and in a chair also made me a little drowsy as well as loopy. So I was home from work for a couple of days.

Despite loopiness and drowsiness, I thought I could work on Eve's background. And I did. I am not going to look too closely as the workmanship on this, however, 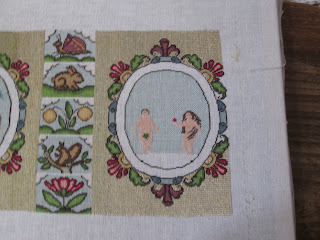 About another inch and I can start the fun stuff.

Today, though, I'm going to see if I can work on the next band on Isabella, the correspondence course from EGA. I think I can get by with the OTC stuff instead of the hard-core meds, and that will mean that I won't be embarrassed to turn it in.