Frances Burwell has the first four bands and part of the fifth stitched. 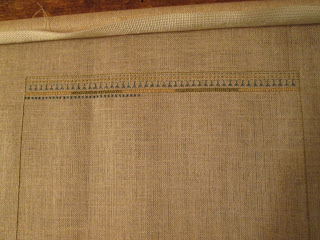 And the heart border around Cupid's Delight is finished. 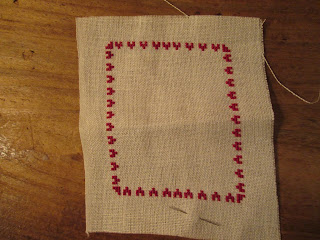 And there are a couple more strands of gold worked into the background of Eve in the Garden, but since you can't really tell that much has changed, I didn't take a picture of that.

Meanwhile, Mary Balch has shown up.

I may have mentioned that we have issues with the UPS driver on our route. The man lies. He says that he leaves a delivery at the front door. He leaves it at somebody's front door, just not the one where it's supposed to go.

We live in a townhouse community. There is an apartment complex at the other end of the street. This time, he left the package in the office for the apartment complex. They called UPS to tell them that they did not have a resident with the name on the box and to please pick up the shipment--along with about a dozen other packages that did not belong to anyone living there. The driver did not do this. Luckily there was a very nice person working at the complex who went to the trouble to find phone numbers and contact information, and who called to let us know we had a package waiting there for us.

So Mary Balch finally arrived. I have opened the box, read the directions, and then had to lie down with a cold compress. I'm going to do a few other things before I embark on Mary's sampler.

At least I can embark on something tonight. I had an eye exam yesterday, which involved having my eyes dilated to the point that the whole world was fuzzy until this morning. I could not stitch. I could not read. I could watch TV, but even that was a little blurry. When all else fails, one can always do housework, so I was dusting until Dearly Beloved pointed out that I was missing about half the dust.  I suggested that perhaps he could follow behind and get what I missed. He was not inclined to do this. Anyway, the result was that I am now very eager to put a few threads into something--and that's exactly what I'm going to do.
Posted by Ann at 4:49 PM