Attention Span of A Gnat

When last I wrote, I planned to see how far I could get with Sarah Williams over the long Fourth week-end.

I got the vine and flower band worked: 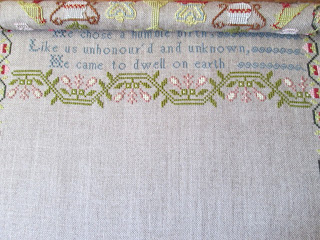 And then something else happened.

I've sort of had a Christmas-in-July thing percolating in the back of my head for awhile. Back in January, I started working on a series of ornaments that had been aging in the stash for a long, long time. The idea was that I'd do one a month until I had all twelve in the series completed.

Then the prework started, and I had only the first of the series stitched. As of Friday, that means I'm now six behind.

So, suddenly, this appeared on the stretcher bars: 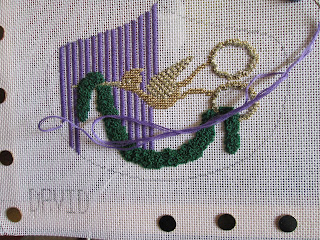 The second of the 12 Days of a Stitcher's Christmas is called Two Golden Birds.

Now I need to decide what to work on today? Do I go back to Sarah Williams? Do I work more on the background for the ornament? That would let me sew the beads on the garland so it doesn't look quite so much like a big, fuzzy green worm in the stork scissors' mouth. Or do I wander off to another project entirely?
Posted by Ann at 8:48 AM