The Party's Over (and re-entry is tough!) 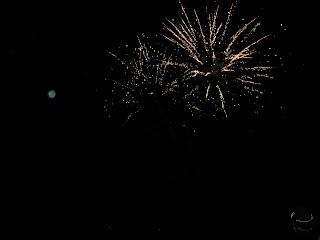 Ahhhhhhhhhh--the opening salvo of the Grand Illumination fireworks in Williamsburg . . .

I took a class from Merry Cox, which seems to have become something of a tradition over the last few years.  If she teaches, I take her class.  Somehow, I can't get it into my head that it's possible to have too many needlebooks or pinkeeps or other smalls, and Merry has such relaxing and laid back classes.  This year offered a bonus, too, in that we could purchase the kits for classes we didn't take.  I took advantage, so I have the kits for Joanne Harvey's two classes and Jackie's class that goes with the one-day class I had taken from her on Thursday.

The JCS people also provided us with nifty surprises each day.  Yes, I realize that our enrollment fees cover the costs of the gifts, but it's still a bit like Christmas everyday.  This year our goodies included a sampler with motifs from most of the teachers who participated this year, a pretty little Colonial Pincushion (Sudberry House piece) and an oval silver box.  One of my friends took hers to the jeweler's shop in the Historic District to have it engraved.  I thought that was a brilliant idea and plan to take mine back when I go to Jeannine's Gathering of Embroiderers in February.  By then, I may decide what I want to have engraved!

We had our "farewell" luncheon on Saturday (since so many people have to leave early on Sunday). It included a tribute to Darlene O'Steen. She was the first teacher at the first Christmas in Williamsburg event.  Due to health issues, this will be her last.  And, of all amazing coincidences, Jean Lea (of Attic Needlework fame) won a very special door prize, a copy of the first edition of The Proper Stitch.  Jean was in Darlene's original class--how special is it that she won the book!

Dearly Beloved and I enjoyed our free afternoons after I got out of class.  We wandered up and down Duke of Gloucester Street, admiring the decorations.  We spent time at DeWitt Wallace and the Abby Aldrich Rockefeller museums (all part of the same complex now). And we oohed and aahed over the fireworks at the Grand Illumination.

Re-entry has been tough!  With the cold I was fighting off, I did no decorating before we left, so there was nothing shiny when I got home.  And I've had to play catch-up at work, so not a lot of energy left for that when I get home--actually, I'm still doing laundry from the trip!  But this week-end, there will be decking of the halls and stitching of projects and fa-la-la-ing!
Posted by Ann at 5:55 PM