Last week-end, after I finished the Strawberry Purse, I was rummaging around in the pile of stuff by the wing chair to pull out one of the two projects that needed finishing. And this is when I discovered another project bag that had four more small projects that needed to be put together.

Well, they were very small, so they shouldn't take long at all, right?

Not so much--but they're done now. 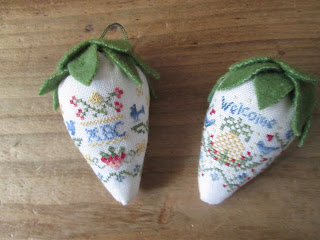 Two of Barbara Jackson's strawberries that I picked up at Haus Tirol in Williamsburg several years ago. I am going to miss going by that lovely store on our next trip to W'burg, but I have several projects from them yet to stitch. 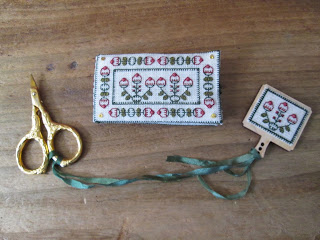 A tiny needle book and even tinier hornbook scissors fob from Catherine Theron. These were sold at the boutique at Christmas in Williamsburg several years ago.

It would appear that some of the sweetest designs I've done have Williamsburg associations.

I had planned to do more finish-finishing this week-end, but Baby Girl sent me off down another rabbit hole.

We had a lot of fun stitching Emie's Etui together, and she suggested that we do another project as a stitch along. So, at the moment, we're both working on Jackie du Plessis' Needlewoman's Work Tray. It's been my after-work project this past week, and this is where I am at the moment: 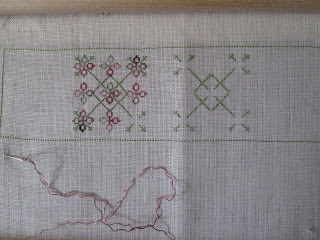 And, yes, it is cross over one. I am a glutton for punishment, but it does give such a lovely, delicate look that I can't resist. This part will be a needle case that sits in the work tray, and I would love to get the flowers done this week-end.
Then back to finish-finishing next week-end. There are still two projects by my chair that need to be assembled.
And there are two bins upstairs that are also full of things I need to sew together. I shouldn't think about that, should I?