The Tudor Pin Cushion is finished! 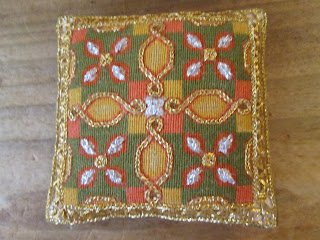 I had planned to finish it last Sunday, but there was a snag. I couldn't find my almost full bag of stuffing.

So, after checking the two local big stores who usually carry stuffing and finding empty spaces where the stuffing should have been, I ordered from Amazon and it was delivered yesterday. So one more project down.

But who would think that fiberfill would be another scarcity caused by the Pandemic?

I had planned to work on the side panels for Barbara Jackson's basket, but I need 16" and 8" stretcher bars. There are enough stretcher bars in this house to build this house, but do I have bars that cooperate with each other? Nope--so ordered those and I'm waiting for them to show up.

Meanwhile, I've finally finished the embroidery for my work project: 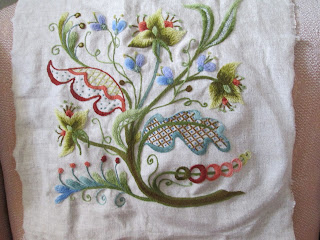 It needs to be blocked, but it's done. I should find another crewel project to work on at lunch time, so I may go stash diving later.

And I got two more rows done on the neon yellow needle case: 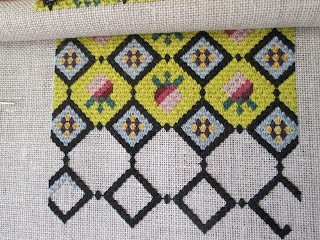 They look like previous rows that have been done. Not much new to see here.

Those are the achievements. Now time for the acquisitions. This has been a very good mail week--at least some lovely things arrived by mail.

Rachael Kinnison's limited edition ornament has been added to the retirement stash (45 weeks until then, but who's counting?). 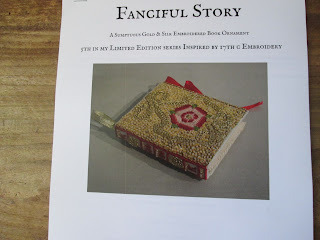 And something simply lovely to add to my collection: 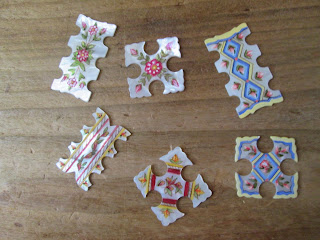 Beautiful hand-painted thread winders, made of Mother-of-Pearl, from Jackie du Plessis. I could not decide on a pattern, so I splurged and got them all.

Now I have to decide what to work on until the stretcher bars arrive. There seem to be quite a few UFO's hanging out around my chair--maybe I should just close my eyes and grab.
Posted by Ann at 11:48 AM