The saddle has turned into a critter. I'm leaning toward fox, but there are equally compelling arguments for cat or raccoon. 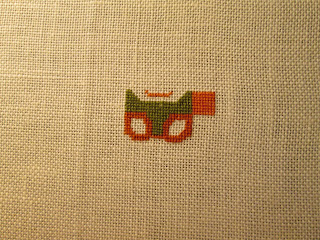 And there has been a little bit of goldwork added to the spot sampler. 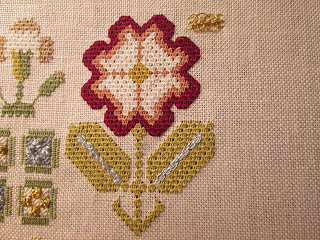 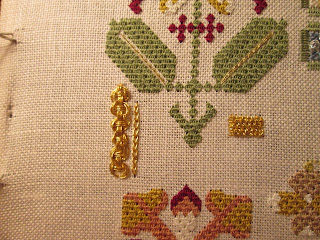 I'm not particularly happy with what I added, so tomorrow it may all come out. I should probably have waited to start this until tomorrow morning anyway, because today I went on an expedition.

Several of us went to see the Tenacity exhibit at Jamestown Settlement. We couldn't take photos in the exhibit (DRAT!!). and there isn't an exhibit catalog (DOUBLE DRAT!!). However, the exhibit has to do with the women who braved a treacherous ocean voyage for an even more dangerous life in the early Jamestown colony.

We barely know anything about any of these women. For the most part, they are simply names on a list of passengers. We know a little more about some whose names appear in legal documents, generally because of their husbands or the masters they served as indentured servants. This exhibit seeks to flesh out their stories and give some context to their all too short lives in a perilous place and time.

To that end, there are items on display that would have been familiar to these women. And, of course, since we are all embroiderers, we went to view an embroidered jacket from the period.

That was worth the cost of admission, since it is in amazingly good condition considering that it's over four hundred years old. The gold thread, especially, amazed me--it didn't appear to have darkened from tarnish but maintained some of its original sparkle. The twining embroidered leaves were finely wrought--I wonder if that came from a professional workshop because it was so precise.

And, yes, I did bump my head on the glass trying to get a closer look.

There was also a spot sampler that looked like it was stitched on something like 60 count linen--if not smaller.  And a coif. And a modern version of an embroidered jacket. And a child's cap that was totally covered with the most delicate of embroidery.

There was also a dunking stool.

Look it up if you don't know what that is.

We agreed that we would all have spent some time in one.