Just when I had decided to make every effort to blog more often, the Mac required an organ transplant.

So I was basically without internet access at home for a week. I believe it was more difficult for Dearly Beloved--after all, I could get online at work occasionally. We are now up and running again.

It has been an eventful week.

Monday night I baked a cake to take to the EGA Christmas party scheduled for Wednesday night.

Tuesday night I made the glaze and glazed the cake.

Wednesday I did not go to the EGA Christmas party because Mother toppled out of her wheelchair and clonked her head on the edge of a table. We broke all land/sea records getting to the emergency room--which is normally about a three-hour drive for us--only to find she had been treated and released. So we went to her retirement home to find her with a goose-egg on her forehead, stitches in the goose-egg, a wide band of adhesive tape wrapped around her head to keep her from removing the stitches on the goose-egg, and a soft, woolly cap on top of all of it to keep her from picking at the adhesive tape. She had a rather rakish look. She now has a seat belt on her wheelchair.

The Saint and I are definitely sure that she is going to outlive both of us.

And Friday night I collapsed in a heap.

There has been some stitching.  On Saturday, I hitched up the granny panties and did some finish-finishing.  I now have a pin pad and scissors fob from the May Your Hands/Shady Bower set of smalls Tricia Nguyen taught a number of years ago: 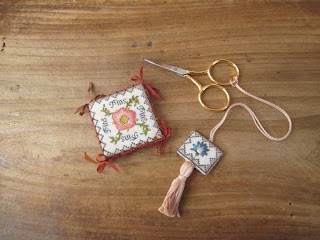 There are only five more pieces to assemble. Only five. Oh, dear . . .

And, here and there, I have found a few minutes to stitch: 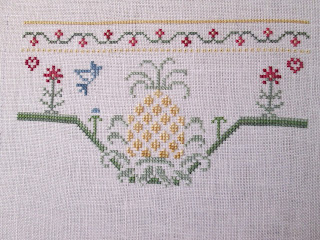 I should be working on Barbara Jackson's annual ornament. Instead, I picked up her Pineapple project and got involved in that. I think it has something to do with bright, happy colors in this during a week that's been grayer and gloomier and rainier than absolutely necessary.

Keep your fingers crossed that this week will be a little calmer.
Posted by Ann at 7:56 AM