This is the front of the next-to-last band of Mary Atwood: 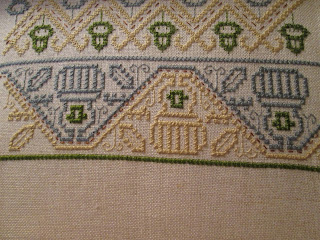 And this is the way it looks on the back with a different reversible cross stitch: 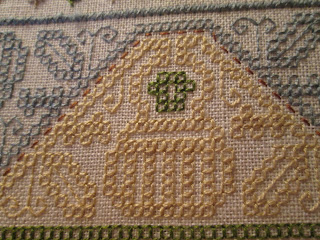 Is that not ridiculously cool?

I know, I know. I have reached the pinnacle of Needlework Nerd-vana to be so excited about this, but I just think this is loads of fun.  Oh, wow, really a needlework nerd!

I will admit that I had problems with this stitch on an earlier alphabet band. Apparently either the stars or my brain cells aligned, but this time it worked out.

And I did something else that I don't usually do. In all of the classes I've taken that involved 17th century sampler techniques, I've been told that you should end your threads on the front of the work. And I don't, mainly because I always feel like there's a little fuzzy end of thread sticking up on the front, sort of like a cowlick. On this band, I did end the threads on the front because I didn't want to mess up the little open boxes on the back.

There is only one more band to do, and I'll have another finish for the year.  I've been trying to decide what I want to do next. I think I'm going to see if I can get another sampler off a set of scroll bars