After I finished Lady Jane's Garden and blogged about it, I still had finishing supplies strewn about and several more hours before bedtime. So I rooted around in the finishing basket and found several things that did not require a sewing machine to complete. 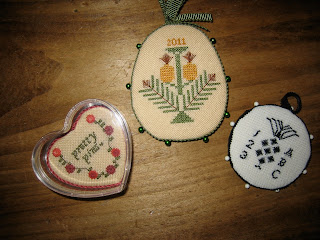 And it was a good thing I at least have this much to show, since I was struck by the Galloping Crud at 3 a.m. on Monday morning.  The terminally perky triage nurse at my doctor's said I probably had the infamous "Something Going Around," that as long as my temp didn't go above 102, I didn't need to come in, and my resistance was probably low because I had just fought off an infection a few weeks ago.

So I asked how to rebuild my resistance and she said to avoid small germy children and big germy groups of people.

Anyway I have spent the last three days grumpily sipping ginger ale (when I could) and nibbling saltine crackers (when I could) and listlessly staring at the TV when I wasn't asleep under a pile of blankets. Dearly Beloved was most concerned because I didn't pick up a needle.

And this would have been a good week to pick up a needle!  The Christmas Ornament edition arrived from Just Cross Stitch.  The latest edition of Needlepoint Now appeared in the mail box.  The kits for Mary and Bess, the companions for Elizabeth, came from Gay Ann Rogers.  The latest Nibble kit came from Thistle Threads.  The first lessons for both Barbara Jackson's Tea Time Basket from Shining Needle and the bird thimble holder from The Essamplaire were posted.

I have finally returned to the land of the living--actually went to work today and managed to stay the whole day--with any luck I'll be able to stitch a bit before I go to bed.  Which won't be very long from now.
Posted by Ann at 3:31 PM